Childminders receive certificate in ‘Childcare Development through Recognition of Prior Learning’ 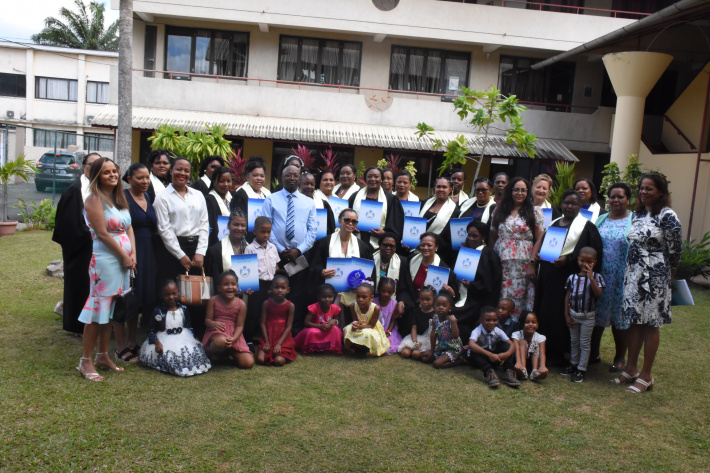 November 7, 2022 by IECD 16
The first cohort of childminders to have completed their training in Childcare Development through Recognition of Prior Learning on Saturday received their certificates.The ceremony took place at the Seychelles Institute of Teacher Education (SITE) at Mont Fleuri.The 26 childminders from across the country had followed a six-month training developed by SITE and the Seychelles Quality Assurance (SQA) at the request of the Institute of Early Childhood Development (IECD).Speaking to the media, the chief executive of IECD, Shirley Choppy, said as part of the national standards set up in 2015 by IECD, which is the local regulator, childminders have to follow a short training on ten established standards for child care, prior to registration. At the end of the short training, they would receive a certificate.

However, in 2018, IECD took it a step further and decided to develop a project involving the SQA and SITE as part of the national plan of action for early childhood for 2019-2020, to have a training done through Recognition of Prior Learning.

Mrs Choppy described Saturday’s certificate ceremony as a landmark achievement for Seychelles education, as it was honouring the first group of childminders who were receiving a certificate recognized and accredited by the SQA in childcare development. This covers those taking care of children between zero and three years, who are yet to start pre-school or creche.

“We are very happy and proud because IECD is putting a lot of emphasis on early childhood development and formal training of childminders. This is a crucial time during a child’s development. Who knows maybe later on they could be asked to do a diploma, which would allow them to move up career-wise and become a creche or primary teacher,” she said.

Speaking on behalf of SITE, which assessed the childminders, its director, Luciana Lagrenade, congratulated them and said her hope was that others would not see the event as the end of a group’s perseverance to obtain formal qualifications but the beginning of a similar journey for others who for various reasons did not or could not complete their schooling “to use the RPL for their self-improvement and through that, improve their lifestyle, their self-confidence, and for all of us to see education and learning as agents of change”.

Mrs Lagrenade added that being small, Seychelles could not afford to neglect training or recognise potentials in the workforce.

“We have to remain permanently vigilant on our needs and ensure all applicable training opportunities and qualifications, and the pathways for this are available. RPL is one of those pathways,” she concluded.

The certificate presentation ceremony also recognised the outstanding performer out of the 26 childminders and Mesha Pelissier won for Best Academic Performer. The 45-year-old based in St Louis takes care of ten children and childminding has been her full-time career. However, she is putting an end to her career for personal reasons.

“I do not work with newborns but rather the older ones who are more active and eager to learn, so I devote a lot of time to them, which keeps me on my toes as I have to ensure I educate them well. Unfortunately, I am stepping down now for personal reasons, but who knows maybe I will return later and put everything I have gained through this training to good use,” she said.

The second-best academic performer, Alice Jean, based in Les Canelles also welcomed the training, which she described as tough as she had to juggle work, family life and studies.

“I knew a lot of what was in the training so it was kind of a refresher but a more detailed one, as we had to learn how to cater for different age groups within that range from zero to three years. It was very useful and I am glad I did the training and persevered despite the challenges,” she said.

Speaking on behalf of her colleagues, Daniella Savy thanked the IECD, SITE and SQA as she said the Certificate in Childcare Development through Recognition of Prior Learning takes into account their knowledge, competency and experience.

She said despite the challenges, they persevered and remained on course.

“Today we are more confident to do our work as a childminder because the status of our profession has been raised and we are focusing on offering quality service. We are now even recognised at international level. This is a remarkable achievement for IECD, SQA and SITE as a training institution and other partners in childcare development,” she said.

There are presently 105 registered childminders in Seychelles and IECD said that demand in the country still surpasses supply. The institute plans to further train more people willing to join the career.

At present, a second group of 19 childminders are following the Recognition of Prior Learning training with SITE and SQA which will be completed next year.

Twenty-six (26) others are doing their basic training in childcare with the IECD.

The accompanying photos show some highlights of the ceremony.