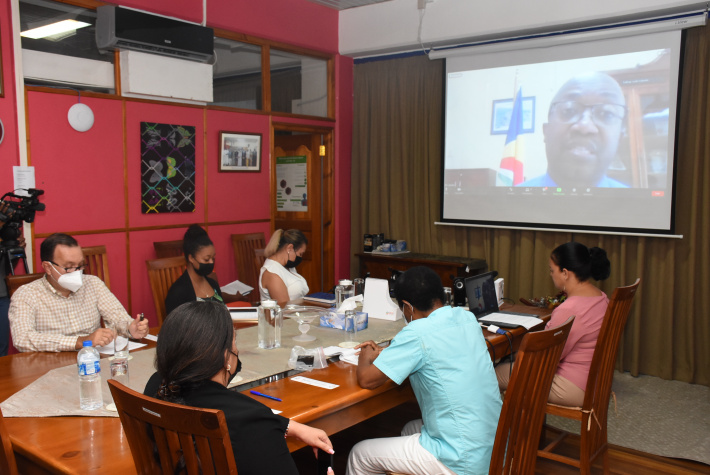 The NAP, an initiative in ECCE derived from the Seychelles Framework for Early Childhood and Education (2011), is part of the national drive to place early childhood development at the forefront of the country’s priorities, consistent with the United Nations Educational, Scientific and Cultural Organisation (Unesco) priorities, and Target 4.2 of the Sustainable Development Goals (SDGs) among others.

In starting the launch, Minister for Education Justin Valentin said the strategic document will serve to build on the successes of previous plans, and will further advance the development of the country’s ECCE agenda, and towards building and sustaining a resilient ECCE system.

“This plan makes a vital contribution to the development of ECCE in the Seychelles. As sectors sharpen the perspective of early childhood and education, nation-building and socio-economic development, planning for ECCE has become more sophisticated, more complicated, more demanding and indispensable, with the aim of building an enabling environment for ECCE, and maximising child development outcomes,” the minister said.

“Another distinct feature is that the projects lined up build on the successes of the previous plan, and intricately link the sectors overarching strategy and planning. These broad projects are to enhance the policy environment and community participation for ECCE to promote the early stimulation, and the healthy development of Seychellois children, improved programmes and service delivery through the involvement of multiple players and enforcement of sustained collaborative partnerships,” Minister Valentin said.

The first edition of the NAP was launched in 2013. Since then, the NAP has become an institutionalised strategy binding ECCE sectors including health, local government, social affairs and education, motivating them to initiate actions aimed at improving provision and services for children, their parents and the community. Notably, it has become instrumental in strengthening policy environment, while facilitating sectoral interchange and collaborative partnership.

The new three-year action plan sets forth the ECCE agenda in Seychelles for the next two years. It has three main features, namely, continued emphasis on early learning by monitoring performance, attending to the early learning environment, developing early resources and training early learning practitioners.

A total of fourteen projects will be implemented by all four sectors as well as IECD, ranging from projects which seek to increase access to quality ECCE services, among other objectives. Similarly to past editions, the implementation of the new plan will be monitored at varying levels, including at the level of the sectors by the Sectoral Technical Teams and Management.

The IECD in its capacity as a coordinating body provides technical support to sectors in ECCE and monitors the progress of each project. It also evaluates the project’s implementation at various intervals during the plan’s implementation stage, and a final evaluation held at the end of the two-year cycle.

This initiative, spearheaded and coordinated by IECD, has been consistently and systematically implemented in government since 2013, and IECD is satisfied with the progress made thus far.

The accompanying photos show some highlights of the virtual ceremony.