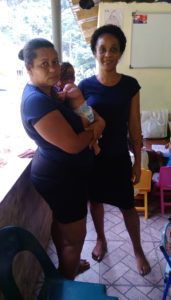 With 3 children of her own, being a grandmother now and her 13 years’ Childminding, Marie-Vonne has enough experience to share. Her love for children especially the very small ones is what encouraged her to take up the profession. So since she was already minding children, when it was announced that it was now a national requisite, she went on to register herself. She says that caring for children was only natural for her and waking up very early to prepare for their arrival doesn’t bother her at all.

Marie Vonne’s establishment allows her to take up to 10 children. She works with an Assistant because she has more than five children and like the others she can take children from 3 months old to about 3 and half to 4 years, depending on when they go to crèche.

Marie Vonne says she has quite a good relationship with most of her parents with a few exceptions. Those who help out do so mostly when she has urgent things to do during the week, she says they come to help the assistant. However, some parents are not supportive enough, sometimes they don’t bring certain things that their child needs “when the parent doesn’t bring diapers for example, you can’t leave a child in one diaper for a whole day, it’s not the child’s fault. So I have to buy a pack for emergencies like that, but this puts financial stress on me.” She says that she would like to take on 2 more children at least, but the current national standards on childminding service does not allow for this. Alternatively, the Childminder can mind more than 10 children but she has to venture into a Day Care service, but this will depend on the available space 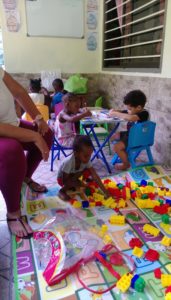 Thankfully, the things that the children do are sometimes so funny that they help her forget her worries and the other stresses. She loves spending time with them and doesn’t regret her decision to work with them. She advises those who are still indecisive to ensure that they have what it takes to care for children “you need a lot of patience and willpower to take care of kids, they are small yes, but they are also very demanding.”

Mrs. Dogley says that she knows she has had an impact on the lives of the children who have been in her care when they come back to see her especially during the holidays. She says that there is one of them who is in S2 who always comes and helps out during the school holidays and she takes the opportunity to teach her a few things. She might be the next generation of Childminders, who knows.

Sadly Marie-Vonne isn’t yet sure for how much longer she can be a Childminder, she says that there are many great things about it, mainly the joy of having children around, but there are also many challenges that are sometimes very hard to overcome. If she does remain a caregiver of children she will remain so as a Childminder. 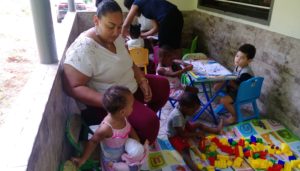 However, she does encourage others to give the profession a try. “There are many benefits especially the trainings you get as well as the financial assistance that the government provides, try it and see, and it if it isn’t for you, you can always stop.”