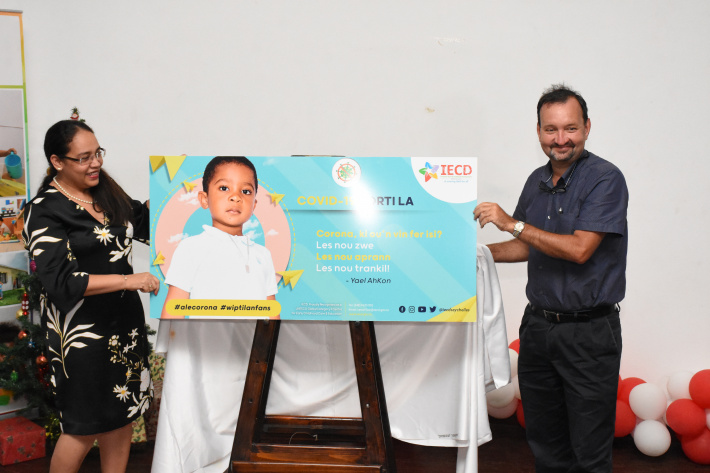 Unveiling the poster to officially launch of the awareness campaign (Photo: Jude Morel)

In commemoration of Universal Children’s Day, the Institute for Early Childhood Development yesterday hosted a short ceremony at the Seychelles Institute of Teacher Education in which it launched two important initiatives, namely its early childhood care and education awareness campaign and a poetry publication.

The ceremony, which also marks the end of the Institute for Early Childhood Development’s (IECD) calendar of activities for the year, was attended by chief executive of IECD Shirley Choppy, chairman of the IECD board David Savy, vice-chairperson Sonia Mancienne and Ambassador for Women and Children Erna Athanasius among others.

In her opening address, Mrs Choppy highlighted the numerous achievements of IECD over recent years, since its inception in 2013, and IECD’s noteworthy accomplishments in raising the standards for early childhood care and education (ECCE) and children’s rights.

“Today’s ceremony marks yet another important milestone in the development of ECCE as we launch two praise-worthy initiatives ‒ the new ECCE campaign based on ECCE and Covid-19 and a poetry publication by professionals in ECCE sectors. The outcomes of these projects are testimony of the ongoing and collective efforts to promote the significance of ECCE, policy development of children in the best possible way, and the coordination of efforts to integrate ECCE initiatives across government plans and organisations, a promise which Seychelles made through the ratification of the Convention on the Rights of Children,” said Mrs Choppy.

“Fulfilling the promise to our children is more relevant this year, as the world and our country are facing a grave and unprecedented threat. The direct health implications of the pandemic have been far milder for children than for other age groups. This is a good sign but the anticipated socio-economic impacts, if not addressed could be devastating for them, compromising their rights to health, education, protection and well-being,” Mrs Choppy stated in her opening address.

Both initiatives launched yesterday have been conceived in line with IECD’s role and strategic action to support the rights and welfare of young children in Seychelles. The ECCE awareness campaign in particular has been inspired by the critical need to sustain early childhood as indicated in the Covid-19 recovery plan for the childcare centre, as well as the United Nations Educational, Scientific and Cultural Organisation (Unesco) calls to make ECCE a strategic priority in the recovery against the Covid-19 crisis.

The IECD is introducing this new ECCE awareness campaign in support of children, families for children, childcare providers, teachers and the population in general. Pertinent messages addressing children’s development and well-being in line with the health crisis within our national context will be displayed on 14 colourful and beautifully designed billboards featuring children, located in various strategic locations on Mahé and Praslin. These messages have been crafted in partnership with partners and friends of IECD.

Through the campaign, IECD hopes to contribute to safer and more resilient community for our young children and to ensure their full development potential is realised. The aim is to support the Ministry of Health and other key agencies in the fight against the pandemic from an ECCE perspective.

The second initiative to be launched is a poetry publication in support of the national theme launched last year, ‘Valoriz kiltir travay dir’. A group of 43 professionals from the education, health and social affairs sectors and IECD staff contributed a poem depicting this theme, all of which have been compiled into a publication, which was yesterday presented to IECD’s partners.

This poem project provided a platform for professionals in ECCE to showcase their talents, creativity and skills in poetry composition in line of their professions. Through this project, the IECD also sought to maintain and further enhance its promotion and advocacy campaigns on the critical importance of ECCE and to raise public awareness on the significance of the national theme. 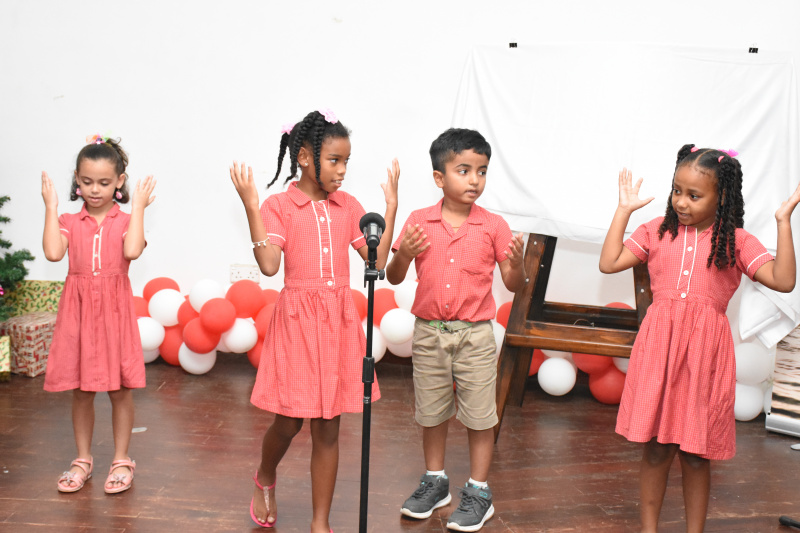 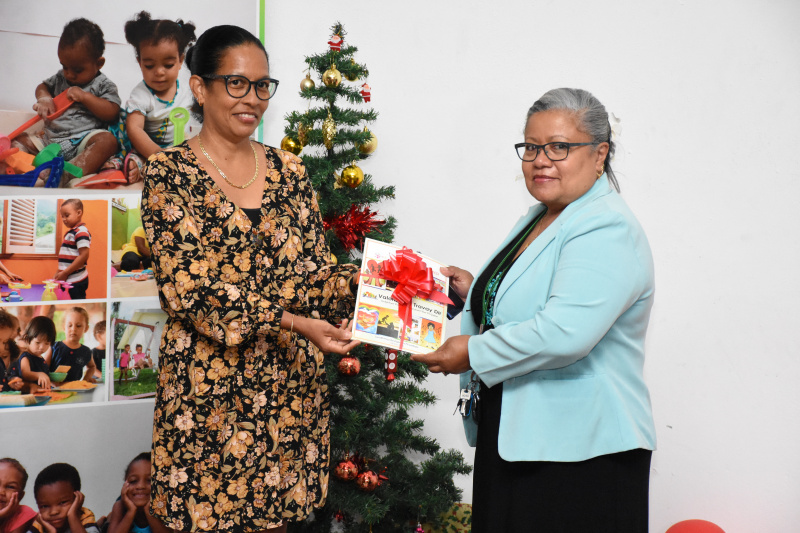 Presentation of the poetry publication to a partner (Photo: Jude Morel)