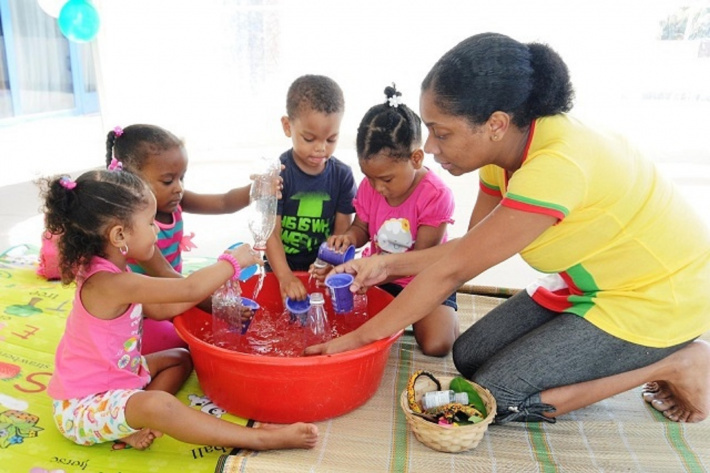 Around 90% of preschoolers have met the necessary targets to start crèche this year, according to an assessment carried out by the IECD last year

A readiness assessment report conducted by the Institute for Early Childhood Development late last year indicates that around 90% of preschoolers have met the necessary targets to start crèche this year.

This is the second Assessment of Early Learning Readiness of Children in Childcare Services undertaken by the institute to determine the level of readiness of children who are entering formal education.

The first such assessment was conducted in 2019 during which 88% of children assessed, between the ages of 3 and 4 years old from 72 child minders and 28 day care centers, were on target.

It is to be noted that the 2019 assessment only saw the participation of toddlers in registered child minding facilities while the 2020 assessment also included those in day-care centres.

IECD’s chief executive Shirley Choppy noted that the institute is very satisfied and encouraged with the upward trend in the readiness of toddlers.

“In 2019 we had a national score of 88% which meant that 88% of the children that were assessed were on target and ready to start crèche. But for 2020 we are even more satisfied that the results have increased by two notches, from 88% to 90%,” said Mrs Choppy.

“This shows that the standards for early learning and interaction have been well implemented, and that the training and initiatives that the IECD has conducted has had an impact on children’s learning.”

The results of the 2020 assessment was presented to child minders, day-care operators, officials of the Ministry of Education and other key partners during a forum on Saturday.

Present at the forum was the Minister for Education Justin Valentin, principal secretary for early childhood, primary and secondary Odile De Commarmond and chairman of the IECD board David Savy.

A total of 696 preschoolers were assessed in the 2020 evaluation based on three performance levels.

Level 1 identifies emergent toddlers and children on this level can identify various body parts such as hands, arm, mouth, nose, foot and eyes, can say his/her name and surname, can participate actively in groups and interact with others.

Level 2 children who are considered as ‘ready’ can additionally make their needs known, follow age-appropriate instructions, show interest in activities, associate mouth with eating and say their parents name, among others.

Meanwhile level 3 children are considered to be the most proficient with the ability to count up to five objects, sort them according to size, shapes and colours, and associate ears with hearing, eyes with seeing and feet with walking.

A child could score a minimum of 0, meaning that they do not have the necessary tools and learning capabilities as their peers, while the maximum score that can be reached is 38.

The consultant involved in data collection for the assessment, Egbert Benstrong, revealed that eight toddlers were unable to reach any of the levels and scored 0 while 46 children were able to achieve level 1.

“We have seen that there is a slight gap between the genders, wherein girls are performing better than boys. There is also a disparity between children in child minding and those in day-care centres where the latter is also performing better. This could be because day care centres traditionally tend to have more structure, but in general the results are very good,” noted Mr Benstrong.

Mrs Choppy added: “The Ministry of Education now has to revise its programmes because we do not want children to be bored. By the time these children reach Crèche Year 1, the more proficient ones should continued to be pushed and develop further, and targeted activities are developed for those who did not score well.”

The results will be disseminated to the Ministry of Education which in turn will send out the results to the schools, so that they can better identify which child needs additional assistance.

The study is considered as a valuable, research-based tool to enable the formal education system to gauge the level of readiness of a broad group of children and provides an opportunity to compare the level of proficiency of children attending child minding and day-care centres.

The forum on Saturday also included various presentations on early childhood initiatives in child minding facilities and day-care centres, a plenary and discussion session and concluded with a donation of R10,000 to IECD from the Hunt Deltel company.

The money is expected to go towards a short documentary which would better explain the results of the assessment. 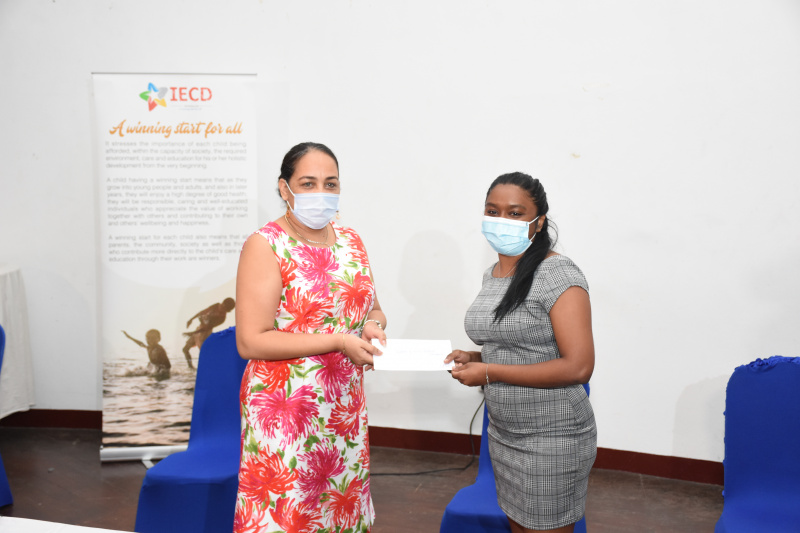 A representative of Hund Deltel hands over the cheque to Mrs Choppy (Photo: Thomas Meriton)